Many Beethovenian works were born from an external proposal, the so-called occasional music that is destined for a particular event or manifestation. The musician jealously guarded these songs, they are music composed for the Harmoniemusik of that time, that is to the military bands or instrumental groups that had this type of staff:

The MARCIA in F major (WoO20) is militarily marked as "Zapfenstreich" (The Retreat). It dates back to 1810 and this editorial transcription, for the current band staff, for uniformity with the other songs has been carried a tone below in Eb major. It is a march in bipartite form, without Trio, and alternates the rings on the brass harmonics with the combined melodic movement of the woods, with riveted insertions distributed in various and pleasant harmonic progressions. It shows a moderate Allegro, very rhythmic, with different dynamic contrasts, all done in cut time.

To this march introduction I added two dance movements: the Polonaise and the Ecossaise, also from 1810, which have the same original instrumental. They are compositions of "music for use" for wind and percussion instruments, they refer to many compositions of this genre. Beethoven has left us over a hundred minuets, ländler, amusements, contradictions etc. These are light songs, intended for balls, entertainment and parties, largely composed for the Association of retired artists in Vienna, towards which Beethoven always showed his solidarity. This shows us how the great musician was not always considered "the hero" the "titan" "the giant" etc. but also and above all a simple man, deeply human and sensitive to every social aspect.

The POLONAISE in Eb major (WoO21) originally in D major composed in the summer of 1810, transported here half a tone above. The original is kept in the Library of the Paris Conservatory of Music and bears the inscription: "for Beethoven in Baden" referring to the place famous for its thermal waters, where the musician stayed during the summer. It is likely that this "3/4 Polonaise" dance was performed by a local military band to entertain guests. It has a simple but festive introduction, even the serene succession of melodies shows the graceful movement of the dance. The final TAIL is interesting where the military character is affirmed, with rings that lead to the final thematic recovery, where the previous rhythms merge into a beautiful sound ensemble. The Polonaise ends with a typical cadence that stops on the upbeat, in suspension.

ECOSSAISE in Eb major (WoW22) is found in the same manuscript of 1810 together with the Polonaise and is also in D major, transported here in Eb. It is part of a series of dances commissioned in Beethoven by Archduke Rodolfo, for a party at Laxenburg Castle, near Vienna, on the occasion of the visit of Emperor Francis I with his wife Maria Ludovica.

The lively Allegro gives the exact characteristic of this sliding dance. The repetition of the melodic and rhythmic tune, sometimes descending and ascending, is interspersed with pleasantly sliding ladders, also ascending and descending. The song is in tripartite form and the TRIO rings in various dynamics, to give the military characteristic and announce the resumption of Da Capo. In repetition it is possible to respect the refrains or not, moving suddenly to the END of the piece, in a brilliant and joyful way.

I kept in mind that it is music originally conceived for the 15 parts of a Harmoniemusik of the early nineteenth century. As for the transcription, that is, the adaptation to a complete band staff (the modern and current one) I did not want to weigh down 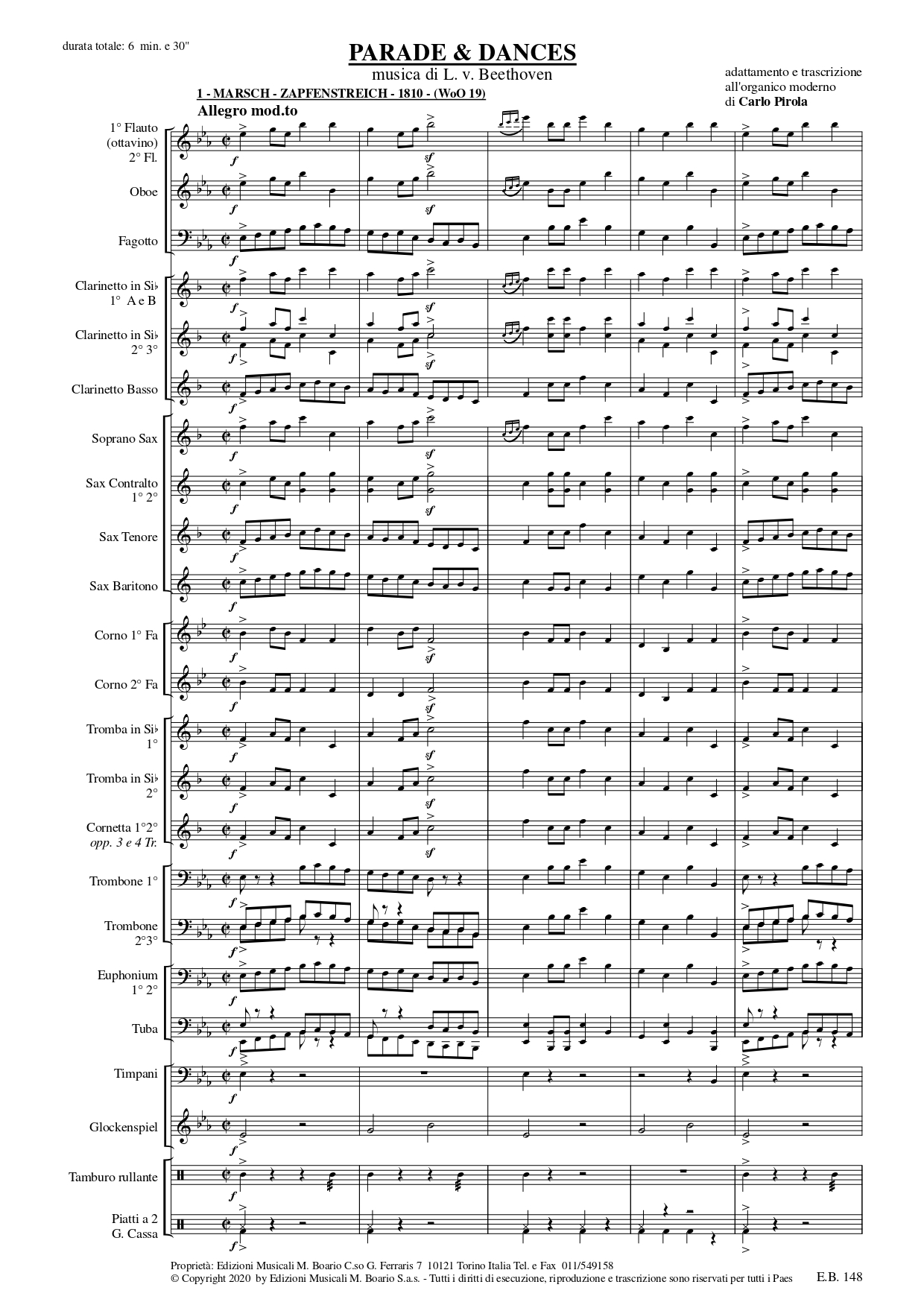 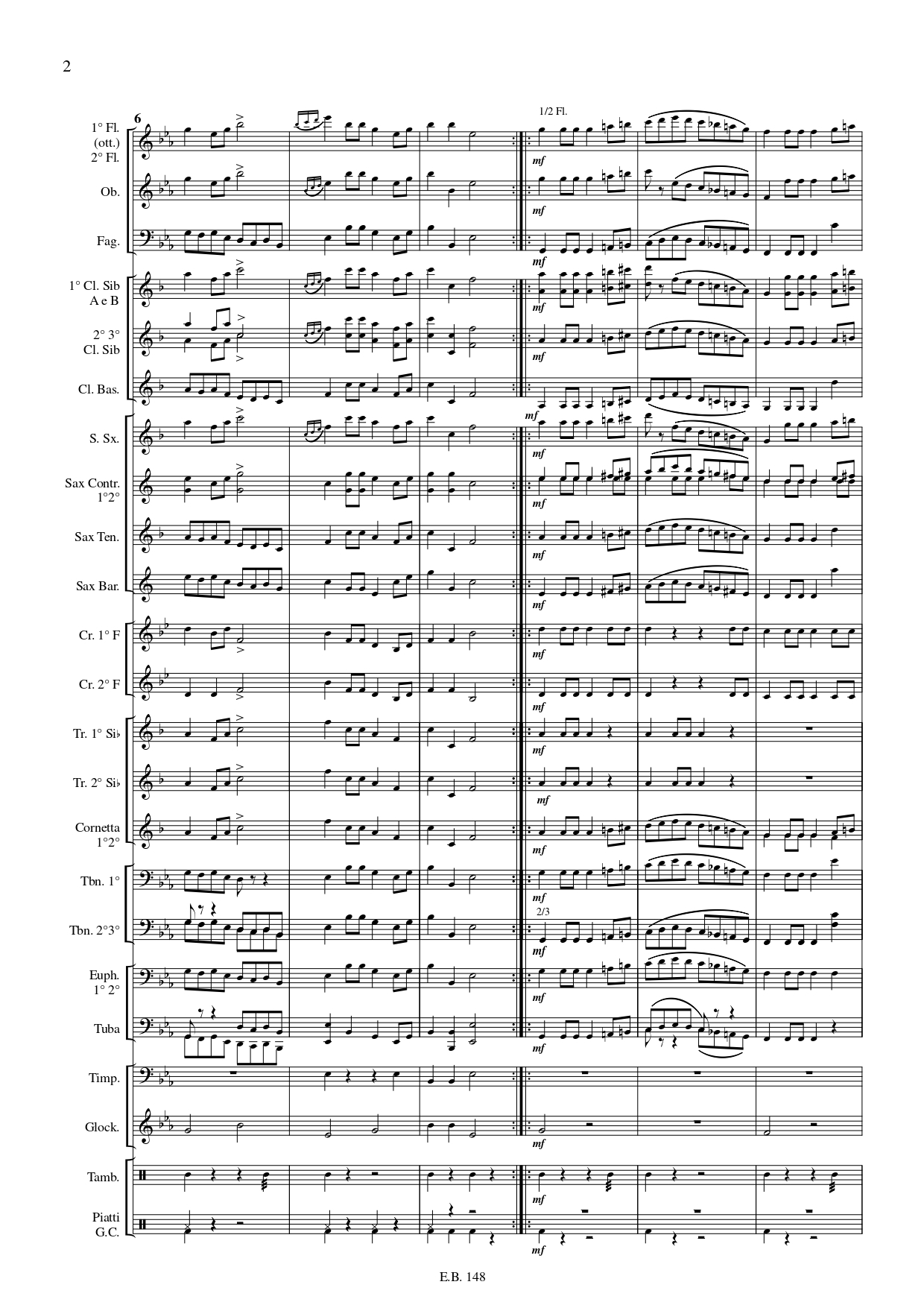